A little overdue but lets talk about attending WWDC 2014.

Last year I attended after winning a Student Scholarship ticket. It was an amazing experience and I immediately understood why people want to go every year. This year I didn't really want to risk that route with less to show on the App Store. More importantly, I thought it was time I left those places to the younger student developers, especially those who couldn't have gone without one. So I entered the lottery, won the right to buy, and made the compulsory Golden Ticket joke on Twitter.

Apple was kind enough to schedule the conference the week after a wedding in USA I planned to attend, making the trip seem a little more cost effective. After some careful budgeting, with a huge urge to repeat last year, and knowing I would likely have even less chance next year I pushed the button. 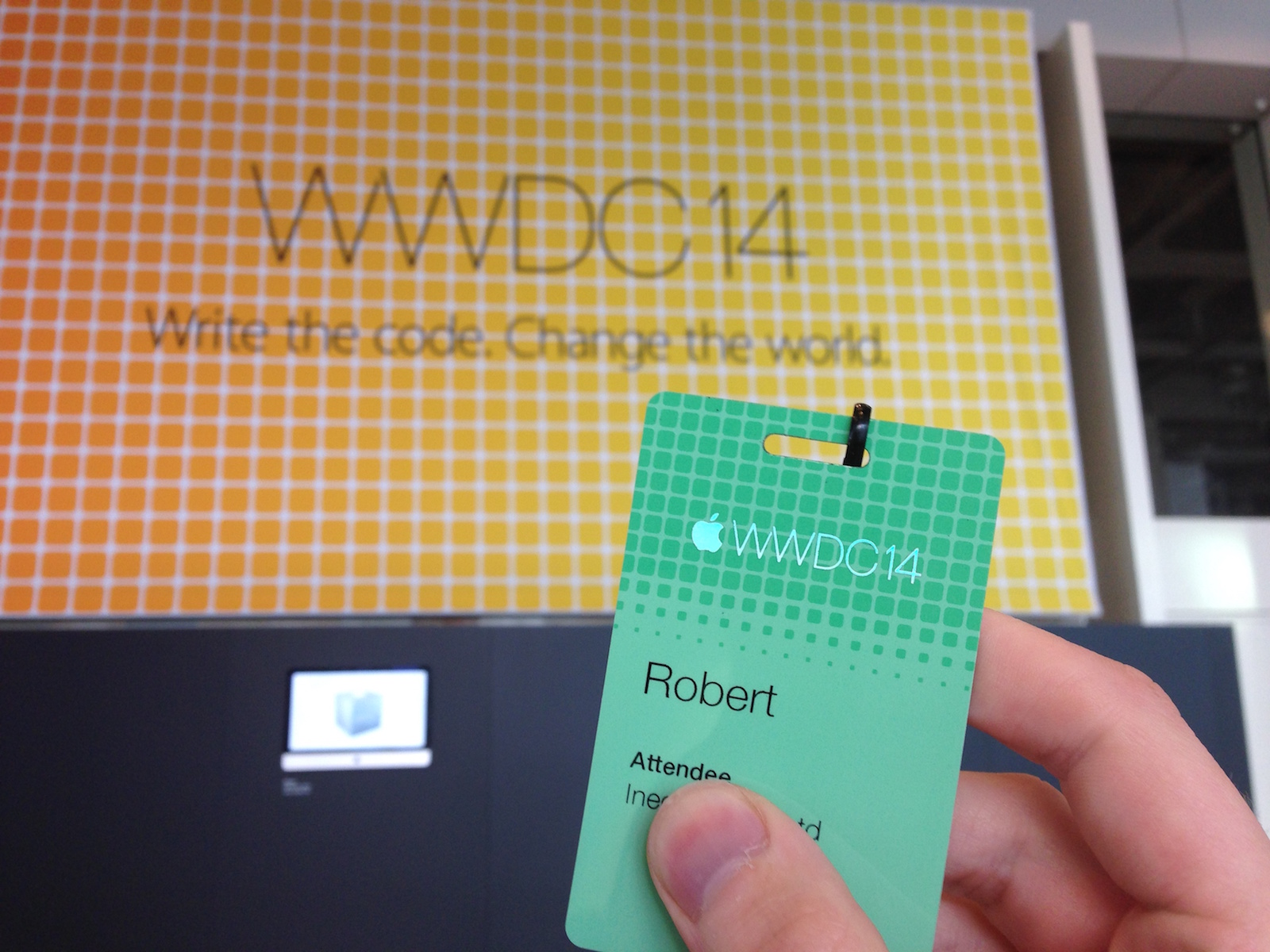 I was too busy in the weeks leading up to it to write a prediction and wishlist post but I did make the usual last minute prediction tweet. With little already revealed that surely still counts.

Not particularly impressive but fairly accurate. The keynote itself was full of energy and enthusiasm, they clearly had a lot to get through. In the audience there was a general sense of satisfaction with what we saw before Part 3 ‘for the Developers’. Part 3 blew everyone away, just when you thought you were recovering and taking in the last surprise they hit you with another. I am pleased I did not queue really early as I would not have taken it all in that day. People have called it one of the best WWDC keynotes in recent years and I was there for the week.

Last year was all about design and meeting people. This year with that much new stuff, and my batteries low from a great stag do and wedding, I was much more interested in the content. Often struggling to choose between 2-3 sessions.

Pre-WWDC there seemed to be a general consensus brewing about the App Store getting saturated and more difficult to make money and differentiate1, extensions and integration could lead the next wave. WWDC provided new opportunities and a renewed excitement. ‘What are you most looking forward to trying?’ became the most popular thing to talk about with new people even though it was difficult to answer yourself. It was closely followed by ‘Have you tried Swift?’ and then the usual ‘So what do you do?’. I wanted to try many of the new things as soon as I got home and watch videos of the sessions I missed with a greater urgency than previous years.

As most of the links below say, it's a great time to be a developer
which made it even harder to go back to my PhD.

The core of this was written during and shortly after the conference. There were a lot of good posts shortly after about people's similar responses to WWDC. Confidence by Craig Hockenberry, Opportunities, not Obligations by David Smith, New Territory by Marco Arment, Together by Casey Liss, WWDC 2014 by Matt Drance, and Only Apple by John Gruber.

1. There has since been even more discussion of the difficultly in making money from your own mobile Apps. Quite a bit motivated by Jared Sinclair's post on Unread's disappointing numbers. Developing Perpsective did a Round up and more.↩

In less than 22 hours Apple will announce its latest products including the newest iPhones. From the rumours, leaked parts, and WWDC14 one is very likely to be a larger 4.7-inch iPhone

I have a problem. When writing I over edit and I am often self-critical to the point of paralysis. This leads to spending too much time on short things, putting things off, and